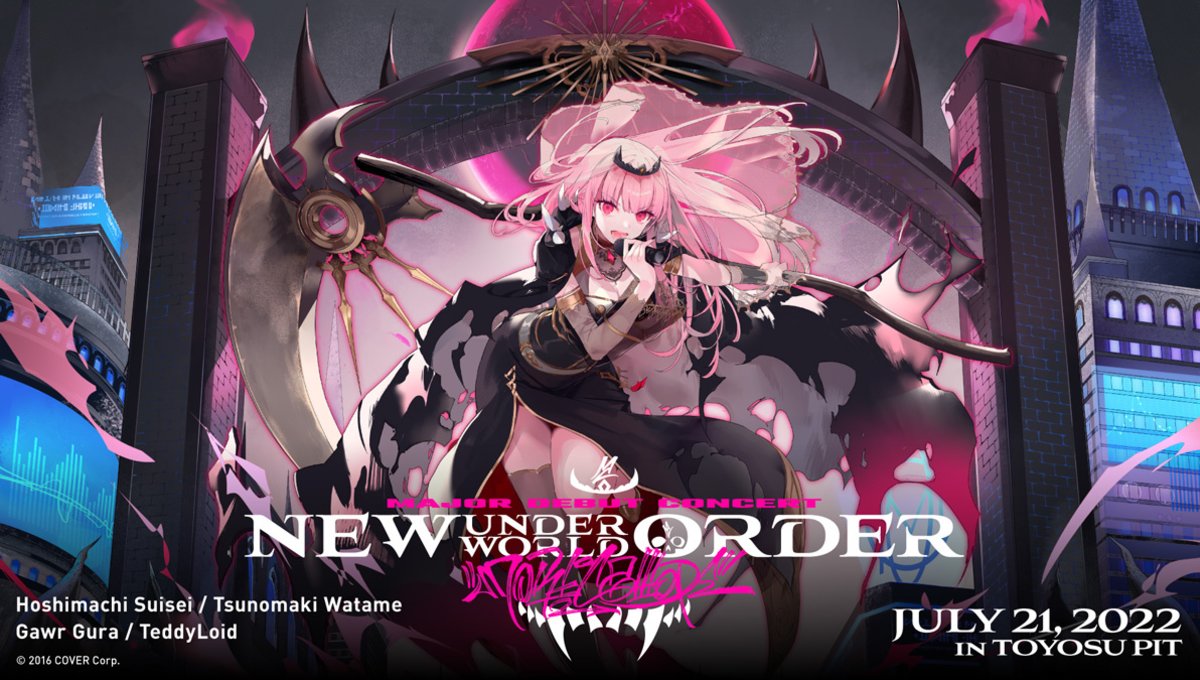 hololive English’s Mori Calliope is set to hold her very first solo concert on July 21, 2022. Tickets for the physical event are already sold out, but fans all around the world can still celebrate with her by buying tickets for the livestream and unlimited rewatches right here! (Until 11:59 pm on August 21, 2022)

We were lucky enough to have the chance to ask Calliope about the concert, from her greatest challenges in preparing for it to hints on what fans can look forward to. And of course, we couldn’t resist wanting to know her favorite dad joke! Ready to hear from the Reaper/rapper herself?

Tokyo Otaku Mode: You’ve made history by being hololive English’s first member to make a major label debut, and now you’re about to hit the world with a solo concert. Could you tell us how you feel about all of this and what you’re looking forward to for the concert?

Mori Calliope: It was overwhelming at first, to be honest… But I’m more excited than anything! I’ve been preparing for so long and put my heart and soul into all of this. The staff working behind the scenes has also been hard at work to give you guys a show you’ll never forget. I want to keep flying further so I can see how far this thing can go! Perhaps it’s a little scary, but I’ve never been one to decline a challenge. I’m a Reaper, after all!

TOM: You’ve built up experience wearing all kinds of hats, including streamer, rapper, and creator. How have you changed and developed since your debut?

MC: Hmm… That’s a tough one. I’m still growing, to be honest! I didn’t stream at all when I was just reaping, so I had to get much better at managing technical difficulties and also making my streams engaging. Back in the day, I’d just play games by myself to unwind. But when you’re streaming, people are there to watch you ADD something to the game experience. Otherwise, they’d just watch a playthrough void of commentary. I had to quickly adapt to the mindset of a streamer, and how to make my content actually worth watching!

In addition, I had to learn how to manage my schedule better… You can’t physically wear all the hats that I do without figuring out how to manage how much of each you can feasibly do.

TOM: Some fans affectionately refer to you as “Dad” or “Papa Mori.” Sorry, but we have to ask… favorite dad joke?

MC: I’m so bad at these… lol. I feel like I’m more a “dad” figure in the same sense as Facebook dads who write statuses like “barbecue with Hank and the boys… Memories of fishing by the lake at sunset… Good times…”

But for you, I’ll pull out one.

“Why are piggy banks so wise?”
“Because they have a lot of… cents…”

TOM: Back to the concert – we can’t imagine how much time and effort you’ve put into pulling off an event on this scale, especially as you’re still streaming and creating new music on a regular basis! What has been your greatest challenge in preparing for the concert?

MC: Getting my stamina up! I love these songs so much that all I wanna do is dance and go crazy on the stage. But if I don’t manage my energy, I’ll be in big trouble toward the end of the concert. All the rehearsals have made things a bit easier to manage, but the true test will be when it’s actually time to perform.

TOM: It was exciting to hear that Hoshimachi Suisei, Tsunomaki Watame, Gawr Gura, and TeddyLoid will be making appearances at the concert. Is there anything you’re looking forward to in regard to working with each of them outside regular streams and musical collabs?

MC: A lot of these guys I’ve already done some awesome collabs with, but for the future, I wanna keep pushing boundaries and enjoying various stuff with them! TeddyLoid is a no-brainer; I wanna make more music with him. But for the other hololive production members, I want to go out to dinner with them, lol. Perhaps it’s really simple, but it’s the truth. I hope they’ll let me treat them! That’s one of my favorite things to do.

I also want to work with Gura to expand holoEN’s reach and promote us around the world with various collaborations and convention appearances! There’s so much more fun to be had in this line of work outside of just streams, and it’s way more fun to explore with a friend.

TOM: We’d love for you to give us any hints at all on what else we can look forward to at the concert.

MC: NEW things. That’s right – there’s a lot to be revealed at the concert, and they aren’t just big announcements. I’ll give you a hint…

Something visual.
Something audio.
That’s not even including the incredible production quality of the actual stage, props, effects… Maybe even a little fire?!
And! And… Some appearances outside of the previously announced guests?!

With all of this combined, it’s gonna be an event you don’t wanna miss, whether you’re an old fan or a new one.

TOM: Finally, can you leave a message for Dead Beats all around the world?

MC: Dead Beats! Listen up. We’re gonna rock the stage for this show. I haven’t been practicing my butt off for nothing. I want to give you the most INSANE show hololive production has ever seen. It’s gonna be super different, that’s for sure – something you’ll never forget, I promise.

TOM: See you at the concert, and thanks for speaking with us today!

Even for a talented Reaper like Mori Calliope, pulling together an entire concert can be quite an ordeal! What are you most looking forward to seeing and/or hearing there?

Be sure to buy your tickets for Mori Calliope Major Debut Concert “New Underworld Order” at SPWN. Not only will you have access to the livestream, which starts at 7:00 pm on July 21, 2022 (JST), but you’ll also be able to relive it as many times as you want with unlimited rewatches until 11:59 pm on August 21, 2022 (JST)!

Calliope’s concert merch is also back in stock for fans who want a memento of this special event.

For more info on the concert, visit the official website.

This is a Tokyo Otaku Mode original article.