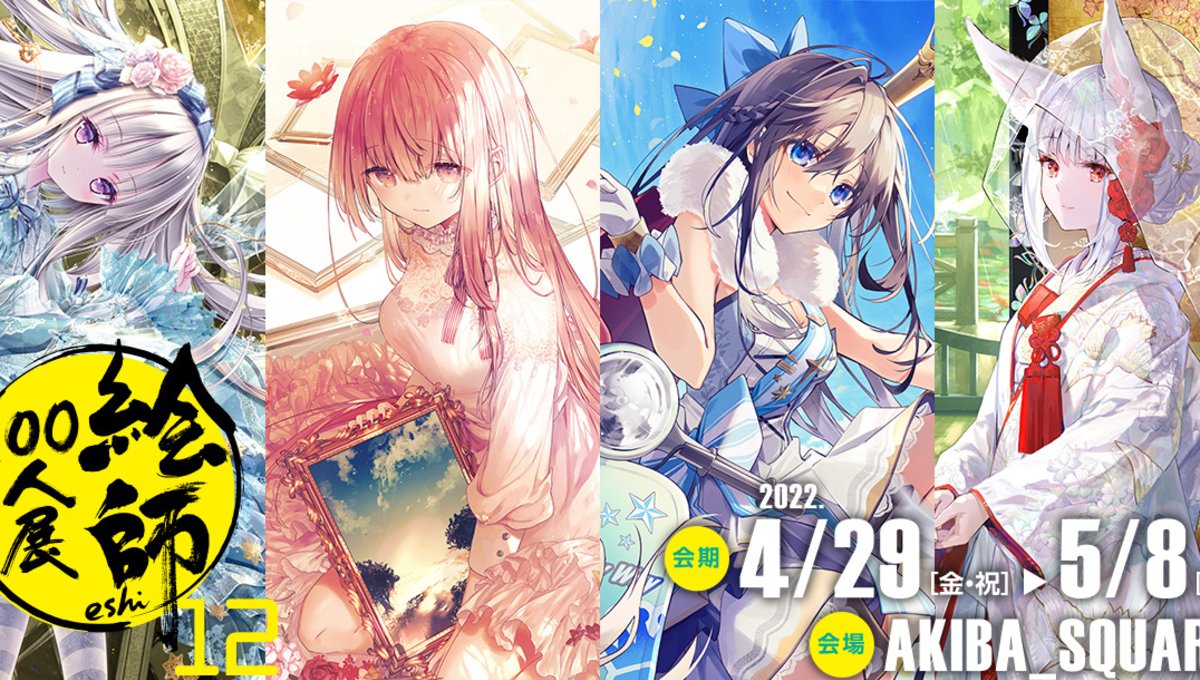 Annual exhibition Eshi100 revolves around the concept of uniting 100 outstanding illustrators with a certain theme. Held from April 29 to May 8 at Akihabara’s Akiba Square, this year’s event was its twelfth so far. Thanks to our friends at Geek Lab, even fans outside Japan can get a feel for what it was like to be there!

The Japanese word michi (written as 道) can mean “road” or “path.” As a physical concept, michi is an essential part of our daily lives, enabling us to come and go between different places, interact with others, and send things to other locations. These days, the Internet is also a kind of michi.

However, the concept of michi also exists in areas of life that don’t necessarily feel physical – for example, people, or history itself. This report will introduce you to art born of people who are following their own paths as illustrators.

After stepping inside Akiba Square, visitors were greeted by the Eshi100 exhibition’s official mascots, Hyaku-chan and Sen-chan.

Now, let’s get into the art itself. Created by aokiume (who provided original character designs for Puella Magi Madoka Magica), the illustration on the left is titled “Yamato Nadeshiko ni Naritai noni!” A yamato nadeshiko refers to the ideal of the perfect Japanese woman, beautiful in both appearance and spirit. It’s no surprise that this piece incorporates elements of tea ceremony, ikebana, and calligraphy, as all three of these traditional arts contain the character for michi when written in Japanese.

Meanwhile, the art on the right, “Lemon,” was illustrated by Shunsaku Tomose, the artist for the Classroom of the Elite light novel series.

On the right of the photo directly below is “Kaido no Wataribito” by Dan Kanda, who was inspired by the connections of paths that are essential to the development of culture.

The illustration on the left is Nishiki Kope’s “Kanosei no Kiseki.” Here, Nishiki is likening the process of believing in yourself and finding the “light of potential” to a path. The piece on the right is “Mayoikonda Michi” by Inukira.

The illustration on the right is “Select” by Asagi Tohsaka, who provided the design for hololive English VTuber Ceres Fauna. This piece compares the action of opening a new path through a choice to searching through a huge library for a book titled “experience” or “knowledge.”

On the left of the photo directly below is Shiro Usazaki’s “Envy Green.” This illustration shows that the paths of others may seem easy at first glance, but each person’s path is accompanied by its own trials.

This piece by Funa Kuga is titled “Sennen no Michi.” Created out of the illustrator’s love for the Heian period (794 to 1185), it’s sure to surprise you with the delicacy of the many-layered junihitoe outfit.

En Morikura, the character designer for VTuber sensation Kizuna AI, contributed an illustration titled “Atoashi no nai Michi.” This piece and its depiction of a lovely aurora was created with the hope that those seeing it would be able to find their own beautiful views.

The wonderfully soft illustration below is Amamine’s “Kore ga Watashi no Michi.”

Last but not least (for this report) is “Hishimeku Saisei” by Lowro, illustrated under the concept of a modern Snow White.

Despite the fact that the 100 illustrators were given the same theme, it was clear that each and every piece was unique, full of originality and the creators’ own sensations and emotions. While it’s no longer possible to see the exhibition’s 104 illustrations in person, there’s a lot more to check out at Geek Lab’s original report!

You can also enjoy the work of Japan’s amazing illustrators with a book containing their masterpieces, which is currently available at the TOM Shop.

For more information on the event, see Eshi100’s official website.

Note: These photos were taken to show the general atmosphere of the event. The images used have been compressed, so please check the official website to see each piece.
Geek Lab has received special permission to use these photos as part of the report.