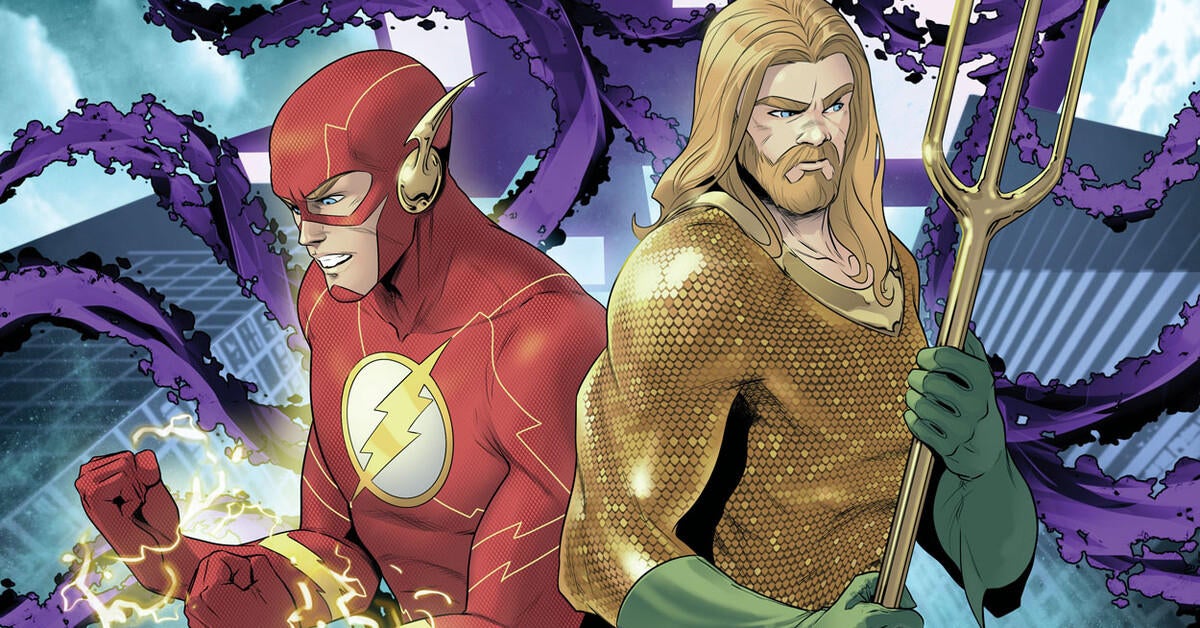 Over the course of the next year, DC fans will be treated to a number of blockbusters featuring some of the publisher’s biggest characters. The stars of two of those upcoming films, The Flash and Aquaman: The Lost Kingdom, have partnered up a lot in group settings over the years — and now they’ll be teaming up in an upcoming three-issue miniseries. During Thursday’s ComicsPro virtual event, DC revealed the first details behind Aquaman & The Flash: Voidsong, a comic miniseries that will arrive later this summer. The book, which will begin with a 56-page debut issue, will be written by Collin Kelley and Jackson Lanzing (Green Arrow, Batman Beyond: Neo-Year) with art by Vasco Georgiev (Batman: Urban Legends) and Rain Beredo.

The world is still. The sky is dark.

All that walks the Earth looks to the sky in praise.

And thus begins the Voidsong.

In Voidsong, they descend suddenly from the stars, in monumental ships like floating cathedrals. They are touched by a dark and terrible force from beyond our reality, silent but for the one note they emit that freezes all motion. Their mission: to drain the Earth of all its kinetic energy and leave it a lifeless husk! In the 56-page debut issue, they never expected anyone could escape their song-but the Flash was in the Speed Force when they struck, and Aquaman was in the deepest ravine far below the ocean’s floor. These heroes have little in common. They’ve rarely even fought side by side without their fellow Justice League members. Now they must find a way to work together against impossible odds to save the world and the people they love!

Issue #1, which will be released on June 21, will feature a main cover from Jay Anacleto, with an open to order variant from Georgiev. According to DC, the issues will be released in June, July, and August, before being collected in a trade paperback in October.

This is the latest unlikely team up book between Aquaman and another member of the Justice League, in addition to the currently-running Aquaman/Green Arrow: Deep Target miniseries.

Will you be checking out Aquaman & The Flash: Voidsong? Share your thoughts with us in the comments below!

As mentioned above, Aquaman & The Flash: Voidsong #1 will be released on Tuesday, June 21, wherever comics are sold.