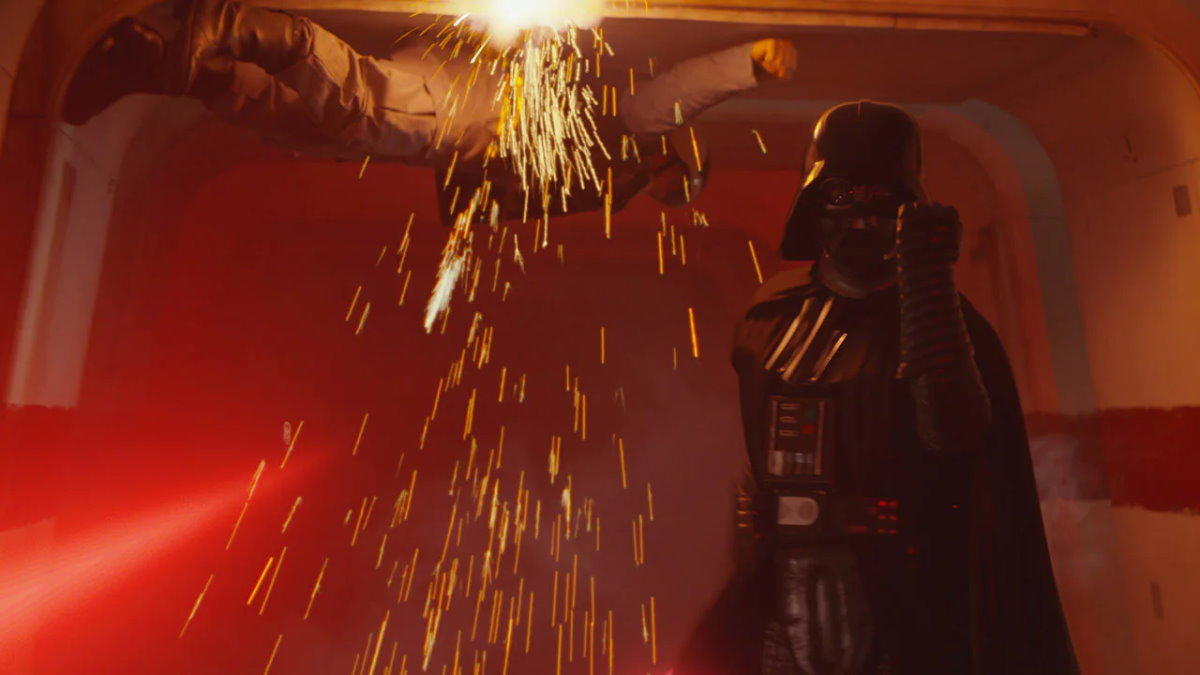 Rogue One: A Star Wars Story opened in theaters in 2016, bringing Star Wars fans their second new film in as many years. It was also the first Star Wars movie not considered a part of the Skywalker saga. And yet, Anakin Skywalker did make an appearance from a certain point of view. Early promotional footage for the film confirmed Darth Vader‘s inclusion in the movie, but few if anyone expected him to draw his lightsaber in the movie’s finale. Vader cut through Rebel Alliance forces with ease while pursuing the Death Star plans acquired by Cassian Andor, Jyn Erso, and their ragtag band of allies. It was the first time Darth Vader appeared in live-action Star Wars since Return of the Jedi, and it certainly left an impact on fans. Rogue One writer Gary Whitta (whose next project is a take on Batman) recalled on Twitter when he first saw this scene in action.

“I still remember vividly Gareth excitedly showing me the first cut of this,” Whitta tweeted. “No music or VFX, wires still visible, but even in that nascent form it was clear that it was going to straight-up murder audiences. As I recall Peter Jackson was on set that day also losing his shit.”

I still remember vividly Gareth excitedly showing me the first cut of this. No music or VFX, wires still visible, but even in that nascent form it was clear that it was going to straight-up murder audiences. As I recall Peter Jackson was on set that day also losing his shit. https://t.co/IsPSNtLpvf

While Rogue One marked Darth Vader’s first return to the Star Wars universe under Disney, it seemingly won’t be his last. Hayden Christensen is reprising his role in the upcoming Obi-Wan Kenobi series on Disney+. With the series taking place between Star Wars’ prequel and original trilogies, he’ll most likely be wearing his iconic armor for a rematch with his old Jedi master.

Christensen is also returning for the upcoming Ahsoka series. However, as the story occurs after Vader’s death, it seems likely he’ll appear in flashbacks, visions, or as a Force ghost as he appeared in the Star Wars prequel trilogy.

Rogue One revealed itself as a prequel leading up to A New Hope‘s opening scene. In a recent interview, director Gareth Edwards recalled being conflicted over the concept.

“I started reading it, and I was like, ‘Okay, where is this going? What is this? Hang on, hang on.’ And then the last paragraph, it all tied in with A New Hope,” he told StarWars.com. “I had this love-hate relationship instantly where it was like, ‘They can’t do this film! They shouldn’t do this film, this is like hallowed ground, you can’t! You’re not allowed to!’ And the other part of me was like, ‘Wait a minute, am I being considered for this? I have to do this! There’s no way I can walk away from this. But hang on, no one should do this, but I have to do it!’

Disney plans to give the prequel a prequel series with Andor on Disney+. The series sees Diego Luna reprising his role as Rebel Alliance spy Cassian Andor before the Rogue One mission that turned the tide of the Galactic Civil War.

Rogue One: A Star Wars Story is streaming now on Disney+.