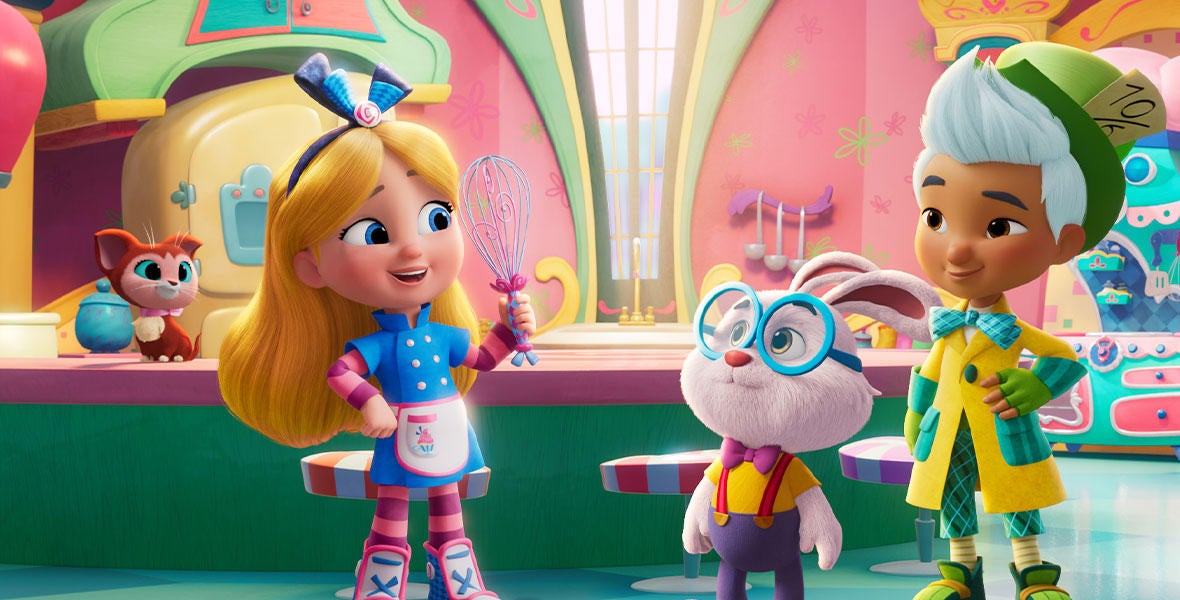 Disney is returning to the world of Alice in Wonderland…many years later. The new series centers on the descendants of the original cast, with young actor Libby Rue providing the voice of Alice, who is the great-granddaughter of the original. It’s a franchise with a long, long history at Disney — there were Alice shorts even before Disney moved into feature films — and so there’s obviously a lot of pressure when you return to the world, but in the case of both Rue and her co-star Max Mittelman, they say they are more excited to play the roles (Mittelman plays the Cheshire Cat) than they are worried about meeting fan expectations.

In the case of Mittelman, he’s the only actor playing the “original” version of his character, with the Cheshire Cat being somewhat mystical anyway. That means he has a lot of wisdom to impart, in his own zany and sometimes inscrutable way, and that he’s the most direct link that Alice has the her great-grandmother, since the Cat was around before anybody else.

“It’s so crazy but so amazing at the same time,” Rue told ComicBook. “This has been a part of so many peope’s lives, and for me to get to bring it to a new generation is just so, so amazing that I’m just so honored to be able to do this, and I just love the world of Alice in Wonderland.”

The series centers on the idea of baking, and that opens up some opportunities for diversity and inclusion that didn’t exist in the original film. The Queen of Hearts bring some spicy Latin-inspired dishes to the show, while the Mad Hatter and his son Hattie bring Japanese-inspired cuisine.

“Alice is such a budding young baker, and she loves to share that with Wonderland and bake with her friends,” Rue said. “It just makes her so happy, and making new recipes to cheer people up is what makes her the happiest, and she also gets to get closer to her great-grandmother. Every recipe that her great-grandmother hands down to her, she feels closer every time.”

Mittelman shared that Cheshire Cat doesn’t generally make his way into the bakery — after all, who wants cat hair on their food? — but that he still gets to play a sizable role when people come to him.

Maybe not surprisingly, considering her young age, it wasn’t the animated Alice that first hooked Rue, but the Tim Burton-directed live-action feature from 2010.

“I always loved the world of Wonderland. I remember watching the live-action version of Alice in Wonderland so many times, and I just loved the whimsical elements to it,” Rue said. “It’s just so cool, and for me to be able to bring that to a future generation has been really great.”

Alice’s Wonderland Bakery airs on Wednesdays on Disney Junior. Check your local listings for times. In some areas, the first six episodes are already available on Disney+.