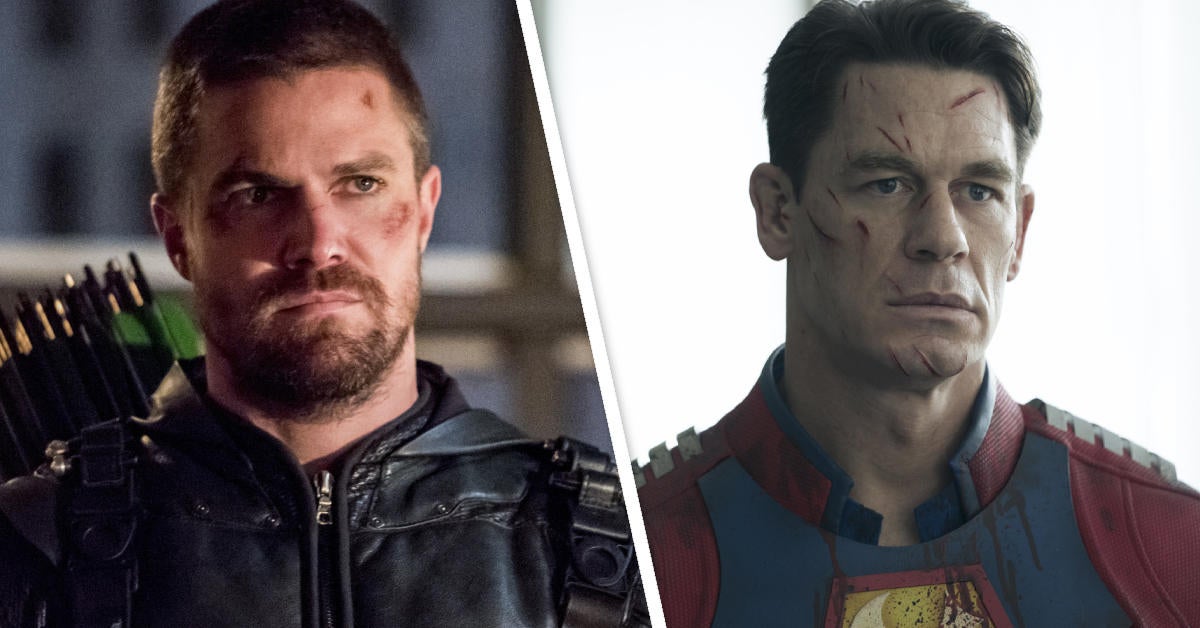 The Season 1 finale of Peacemaker premiered on HBO Max on Thursday, and it gave viewers absolutely no shortage of things to talk about. In and amidst the shocking character cameos and laugh-out-loud moments, the episode provided the confirmation that Oliver Queen / Green Arrow exists in the universe — albeit, with an incredibly specific joke at the character’s expense. The reference delighted and confused fans of the Emerald Archer, and now it has apparently caught the attention of Stephen Amell, who portrayed a version of the character on The CW‘s Arrow. On Friday, Amell took to Twitter to react to the name-drop, and arguing that he hasn’t watched Peacemaker because he’s been “too busy showing” series star John Cena “what professional wrestling should actually look like on TV”, a reference to Amell’s current role on the Starz wrestling drama Heels.

Haven’t seen it. Too busy showing Cena what professional wrestling should actually look like on tv. https://t.co/CDE35wi8XX

The Green Arrow mention, which occurs early on in the episode, sees Cena’s Christopher Smith / Peacemaker arguing that “that dude goes to Brony conventions dressed as the back half of Twilight Sparkle” with a hole “drilled” in the back of the costume. John Economos (Steve Agee) then remarked that he’s also heard the same rumor. While Amell’s portrayal of Green Arrow is definitely set in a separate universe from Peacemaker, with fans hoping that a different incarnation of the character makes his debut in the Black Canary HBO Max movie or another upcoming project, his acknowledgement of the reference is sure to delight those who enjoy both series.

“I do think that Peacemaker’s relationship to other superheroes is very specific,” series creator James Gunn told ComicBook.com earlier this year. “He is envious. He wants to be in that holy trinity of Batman, Superman, and Wonder Woman. He is not. He wants to be a member of the Justice League, and they would never let him into the Justice League. He wishes that people loved him as much as they love Aquaman, but they don’t.”

“So he believes anything and kind of picks out what he wants to believe on the Internet, which any random Joe has tweeted or put on,” Gunn continued. “He also doesn’t quite understand the Internet. He’s not very well versed in the Internet, so he sees something on Facebook, and somehow he thinks that’s fact. But I think that it also serves his envy to be these things about people.”

What do you think of Stephen Amell’s reaction to Peacemaker’s Green Arrow reference? Share your thoughts with us in the comments below!