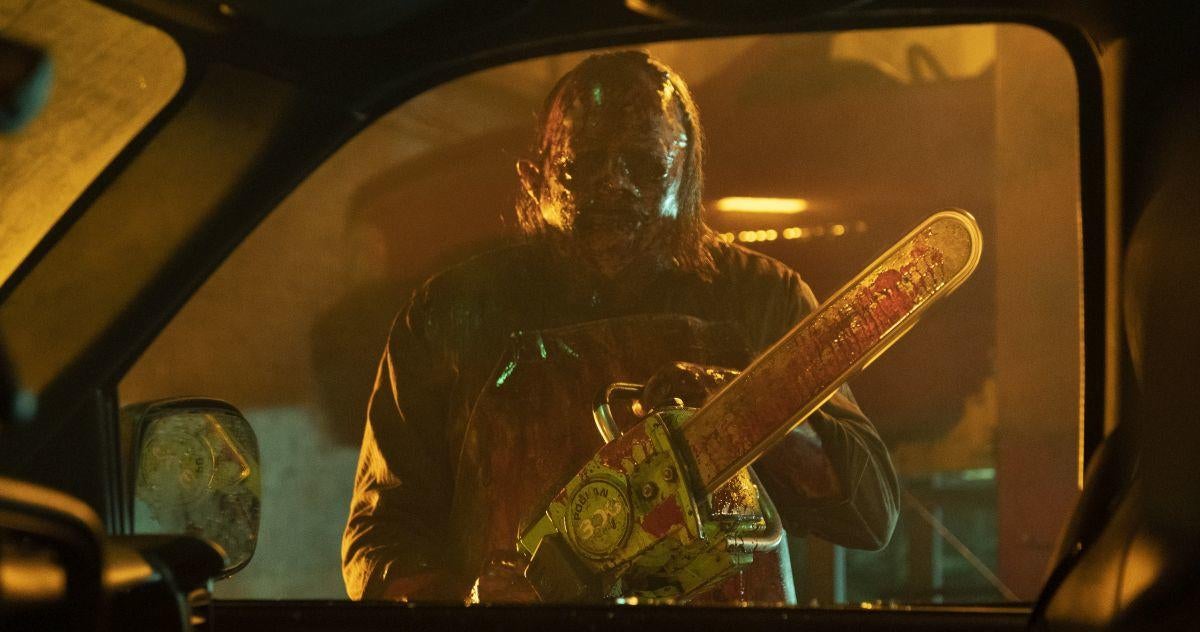 The reason that it took Tobe Hooper 12 years to make a sequel to The Texas Chain Saw Massacre, all while its pale imitators had become full-blown franchises with yearly installments, was because he had no ideas. That the man who created Leatherface and his twisted clan of psychos hit a decade-plus of writer’s block is telling; even more so as we consider the landscape of this “franchise” and its commitment to rebooting itself every five years, all while straying further and further from Tobe’s initial blueprint. With the latest swing at-bat, Legendary’s Texas Chainsaw Massacre attempts to be multiple things at once, ultimately becoming satisfying for almost no one and proving that there are still no new ideas.

Taking the beat-for-beat ideas of 2018’s Halloween reboot and applying it to this series, Texas Chainsaw Massacre is set 50ish years after the original film with no hint of any of the other movies having taken place. Leatherface seemingly went quiet after the events of that movie and has been missing ever since, taking up residence in a different, small Texas town and putting his tools away for a rainy day. To add a minor layer of meta-irony, the events of the original film have become true-crime legend, one known as “The Texas Chainsaw Massacre” and which is narrated on TV once again by John Larroquette.

One of the first scenes shows off a gas station filled with merchandise that celebrates the event, one of a handful of moments where the new movie embodies a wicked sense of humor like Hooper’s The Texas Chainsaw Massacre Part 2. In fact, there are more than a few times where there’s a very darkly comic gag in this Texas Chainsaw Massacre, but they’re few and far between and largely so different from the overall tone of the movie that they stick out. This movie proves you can’t try and marry Tobe’s first movie with his second.

While the 1974 Chain Saw was a film that was imbued with subtext and went out of its way to create a mood through subtlety and everything that it didn’t show you, Texas Chainsaw Massacre is as big, dumb, and loud as a party bus parked near Bourbon Street. The marketing has led some to believe that this film will be a send-up of internet influencers, cancel culture, and social media-obsessed Zillennials. It is ultimately none of those things, using those tenets as very basic character traits that amount to window dressing. Texas Chainsaw goes out of its way to point out why no one in their right mind would come out to the middle of nowhere, then fills itself with characters that are given the shallowest possible reasons to do just that.

The characters in Texas Chainsaw are so inconsequential that most of them, even one introduced in the first minutes, don’t even have names mentioned on-screen. They wander about, moving from scene to scene because the script dictates that they need to be present for what happens next; it’s exhausting and sloppy, even from a viewing standpoint. Tantamount to this is the film’s attempt at creating a Jamie Lee Curtis/Laurie Strode analog, turning original survivor Sally Hardesty into a tough-as-nails Texas Ranger with a vendetta. At least, that’s what the movie wants you to think of its use of the Sally character; instead, it uses her as little more than a prop for Leatherface and a pitiful handoff to the new final girl, Eighth Grade‘s Elsie Fisher in a thankless role.

Though largely joyless, there are some bright spots within Texas Chainsaw 2022. In addition to the previously mentioned moments of black humor, the gore sequences are mostly unique and sometimes quite gnarly. A character takes a hammer to the chest and flies like a cartoon while the slaughter of another by a meat cleaver is shown off exclusively through a swinging door which acts like a zoetrope, the latter of these being a moment so full of style that it feels out of place with everything else around it. How are there moments of fun and weirdness that feel like they accidentally made it into the final cut?

Actor Mark Burnham, who plays Leatherface, embodies the oddity of the character in the same ways that the late Gunnar Hansen displayed in the original film, another decent offering from the new movie. A larger-than-life person that becomes a living tool but whose self-expressions move into unexpected territories when by himself, it’s a version of the character that feels more true to Hooper’s vision than any of the other attempts in recent memory. Sadly, the movie cannot decide what it wants Leatherface to be. At times, he goes from being the mentally unstable killer we know to leaping out of a pool of water like Aquaman and setting traps like Kevin McCallister. Like the film itself, this Leatherface waffles from one variation of what it could be to another from scene to scene, consistency shed like a freshly worn face.

The Texas Chain Saw Massacre was about the deconstruction of the American nuclear family, it was about the falling apart of the homeland that had become entrenched in the Vietnam War, it was about the slaughter of animals. Edwin Neal’s Hitchhiker laments that his family “has always been in meat,” and it’s part of the thesis of the movie that Tobe himself said was about meat. This Texas Chainsaw Massacre is not about anything; at least, nothing beyond a cheap cash grab, which is, well, pretty much in keeping with the rest of the series. I will give it this, though: it does actually feature a massacre, delivering a sequence so soaked in blood you might forget how boring the rest of the movie can be.