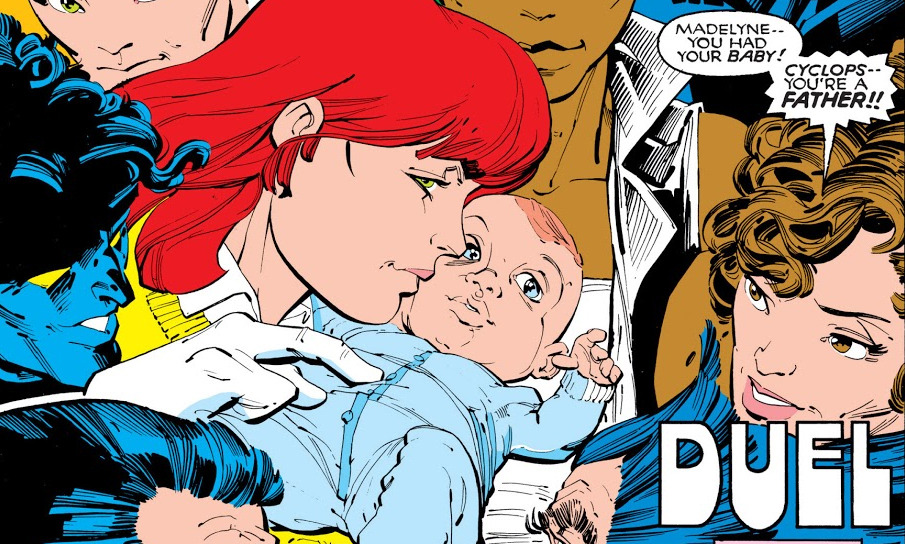 A live-action version of Cable blessed homes across the world recently when the trailer for Deadpool 2 hit the internet, and oh boy, Josh Brolin looks awesome as the time-travelling leader of X-Force. He’s going to be a major part of the newest superhero starring super-powered mutants.

But who is Cable, and where does he come from? Those answers aren’t simple, as many characters from the X-Men comics have overly complicated and convoluted backstories, especially Cable. We’ll do out best to fill you in and let you know everything you need to know about Cable.

Nathan Summers–the baby who would eventually become Cable–made his debut in The Uncanny X-Men #201 in 1986. His parents were Cyclops and Madelyne Pryor, a clone of Jean Grey. During the child’s early years, Mr. Sinister wanted to use Nathan as a weapon to destroy Apocalypse.

However, things didn’t go exactly as planned, and Nathan fell into the hands of Apocalypse. Being a bad guy in the X-Men world, Apocalypse infected Nathan with a techno-organic virus. It was incurable. In order to save the boy from dying, Askani–a women from the future who leads the fight against Apocalypse–instructs Cyclops to take Nathan 2000 years into the future.

It turns out Askani is Rachel Summers, the daughter of Cyclops and Jean Grey from an alternate reality. Askani clones Nathan in case he doesn’t survive the virus. That clone was abducted by Apocalypse loyalists during an attack (more on that later). The real Nathan survives the disease and for some time, is raised by Askani.

The version of Cable we all know and love (created by Louise Simonson and Rob Liefeld) debuted in New Mutants #87 in 1990. He was a really cool-looking character with a military mindset, who tried to take down the Mutant Liberation Front. Cable has several confrontations with the leader of the MLF, Stryfe. In issue #100 of New Mutants, Stryfe removed his helmet to reveal that he looks exactly like Cable. You probably know where this is going.

Cable moved on to lead a new X-Force team, with a slew of new mutants. During X-Cutioner’s Song, Stryfe goes undercover as Cable and attempts to kill Professor X. Meanwhile, Cyclops and Jean Grey get kidnapped, and the X-Men learn that Stryfe is behind it all. It turns out that Stryfe was that cloned baby of Cable from the future, which, at the time, was a shocker. Eventually, the story leads to an epic battle on the Moon where Cable seemingly sacrifices himself in order to kill Stryfe.

However, it turns out Cable wasn’t dead, and he was displaced in the future. For more than 20 years, there are stories with Cable teaming up and fighting other members of his lineage, taking on a new Mutant Liberation Front, and working with unlikely foes. It wasn’t until 2004 that comic fans got one of the character’s best series: Cable & Deadpool.

While the two characters met during Deadpool’s first appearance in New Mutants #98 back in 1991, the 2004 Cable & Deadpool series explored the relationship between them. It’s funny, bizarre, and while there aren’t any Earth-shattering stories that completely change the course of either character, it’s widely considered to be a brilliant, entertaining, and engaging series.

Back to the serious part of Cable’s history, one of his bigger stories comes in the aftermath of “Decimation,” a storyline where Scarlet Witch said the words “No more mutants,” thus causing all but 198 mutants in the Marvel Universe to disappear. Then, one day, a new mutant was born named Hope. Her town was attacked by The Purifiers–yet another anti-mutant terrorist group–but Cable showed up and saved her. He believed Hope was destined to save all of mutant-kind. However, others–like Bishop–thought differently, so Cable was tasked with taking care of her.

During this story, Stryfe shows back up and tries to kill Hope. He was stopped time and time again by Bishop, Cable, and the X-Force. After saving Hope again, Cable parted ways with her and went on to start a new X-Force team.

Cable’s abilities are a mixture of mutant powers and technological enhancements. As a mutant, he has telepathy and telekinesis, much like his mother–minus the whole demonic black magic thing Madelyne had as Goblin Queen. Cable’s mutant abilities are extremely powerful, and he has variations on both telepathy and telekinesis that many other mutants with his abilities don’t have, like precognition: being able to get visions from the past or–on occasion–being able to transfer his mind and powers into other people.

On the tech side of things, Cable has a metallic arm which gives him enhanced strength. In addition, he has a force field that protects him, like we saw in the Deadpool 2 trailer when someone shoots at him. (Depending on the comic, some creators have said this is part of his telekinetic powers though) Cable has a cybernetic eye. This eye allows him to see different spectrums that a human eye wouldn’t be able to see, and in addition, he’s been known to fire a laser out of it. Of course, he has other technological advantages, but none of them is more important than being able to travel through time, which doesn’t happen as often as you’d think in the comics.

Looking for some recommended reading? Check these storylines out!