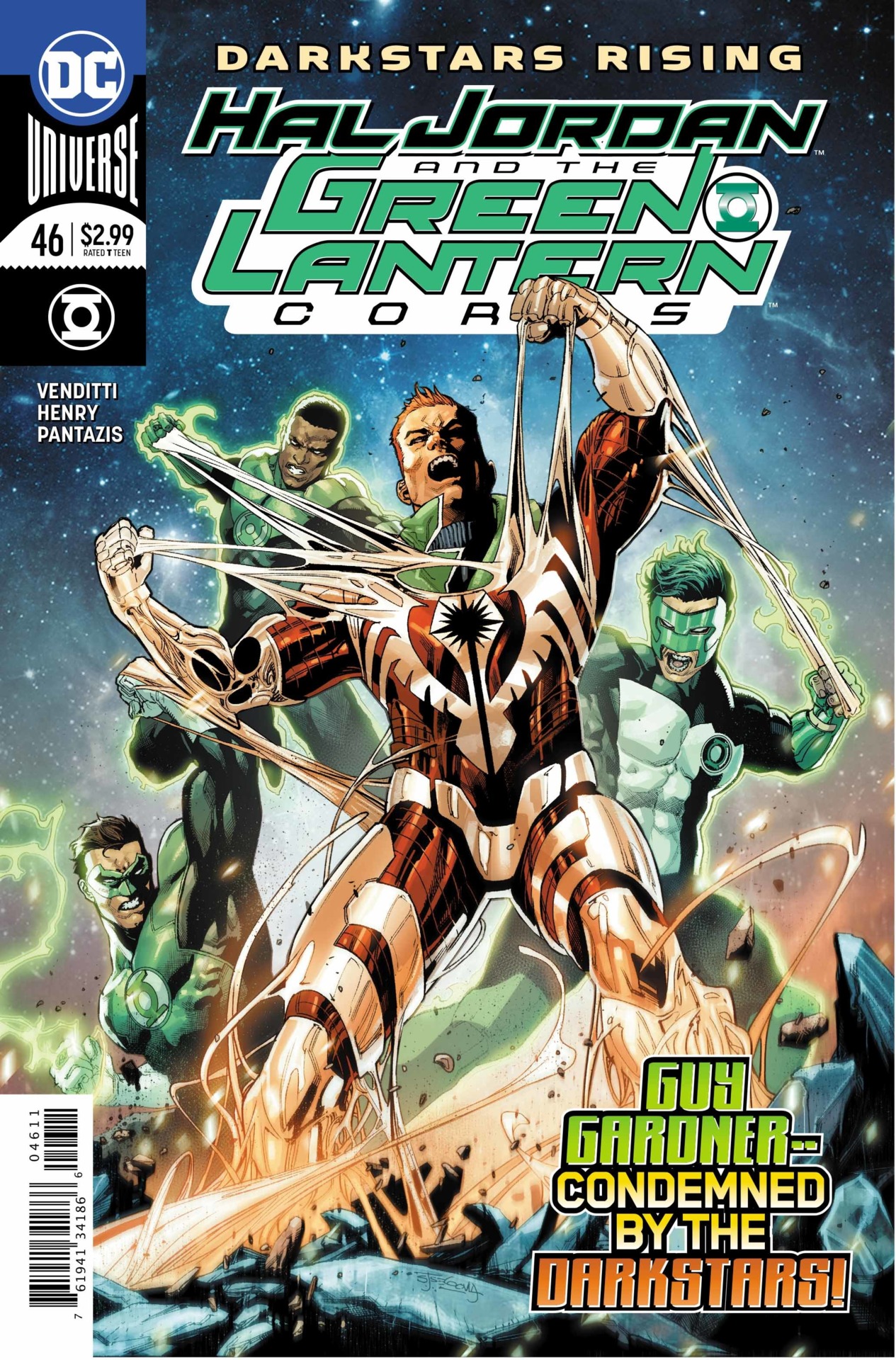 The current storyline, now hitting Part 5, is called “Darkstars Rising.” In it, a new force called the Darkstars has appeared. While this team first appeared in DC Comics back in 1992, they were disbanded in 2005, and this new incarnation is a more twisted version of the original team, as they murder criminals, so the villains don’t have a chance to do it again.

The most notable member of this new manifestation of the team is former Green Lantern Tomar Tu. He was son of the famed Tomar Re who gave his life in battle and was the mentor to Hal Jordan. Tu is joined by Guy Gardner, who should be a familiar name to any Green Lantern fan. The former Green Lantern/Warrior/Yellow Ring Bearer/Red Lantern has a torrid past which is resurfacing in Hal Jordan And The Green Lantern Corps #46, as Gardner comes from an abusive relationship with his father. Check out a preview of that issue below.

Gardner’s journey has led him to leave the Green Lantern Corps in such of more final justice. He’s a character that refuses to give up in battle. “It’s because no punch he ever takes hurts as bad as the ones his dad used to give him, and that’s kind of where he gets his will from,” explained writer Robert Venditti. “It’s just this really fascinating, heartbreaking aspect of Guy where he almost believes he deserves the punishment, and the punches in the face, and this is why he’s always starting fights because he still has that weight that he carries with him from when he was a child and his father was beating him.

“Guy carries a lot of that anger, and so as the Darkstar mantles are going out, in a sort of automated way, they seek out people who have these thoughts of lethal justice, and go to them, and ask people to volunteer to become a Darkstar.”

The “daddy issues” don’t stop with Guy and his father. “These themes that we have that have been running throughout the entire series that deal with parents and children in general,” continued Venditti. “You have Hal and his father, Guy and his father, Soranik and Sinestro, Tomar-Tu and Tomar-Re, the Guardians and how they view the Green Lanterns as children. [The] parent-child dynamic is something we dealt with throughout the entire series. So, we’re gonna see a lot of ways in which that affects and changes characters as we get to the end of the story.”

The new story is expansive, including characters like Superman’s arch-nemesis Zod and Eradicator–one of the four returning Supermen after the Man of Steel’s death in 1993. Additionally, there’s a story involving Highfather and Orion, two of the New Gods, so this dynamic between parent and child is far-reaching into the DC Universe and something any reader should easily be able to relate to.

You can pick up the five parts of “Darkstars Rising”–starting with issue #41 and continuing with the June 13 release of #46–by getting yourself some copies of Hal Jordan And The Green Lantern Corps at your local comic shop or through the digital market with apps like Comixology.