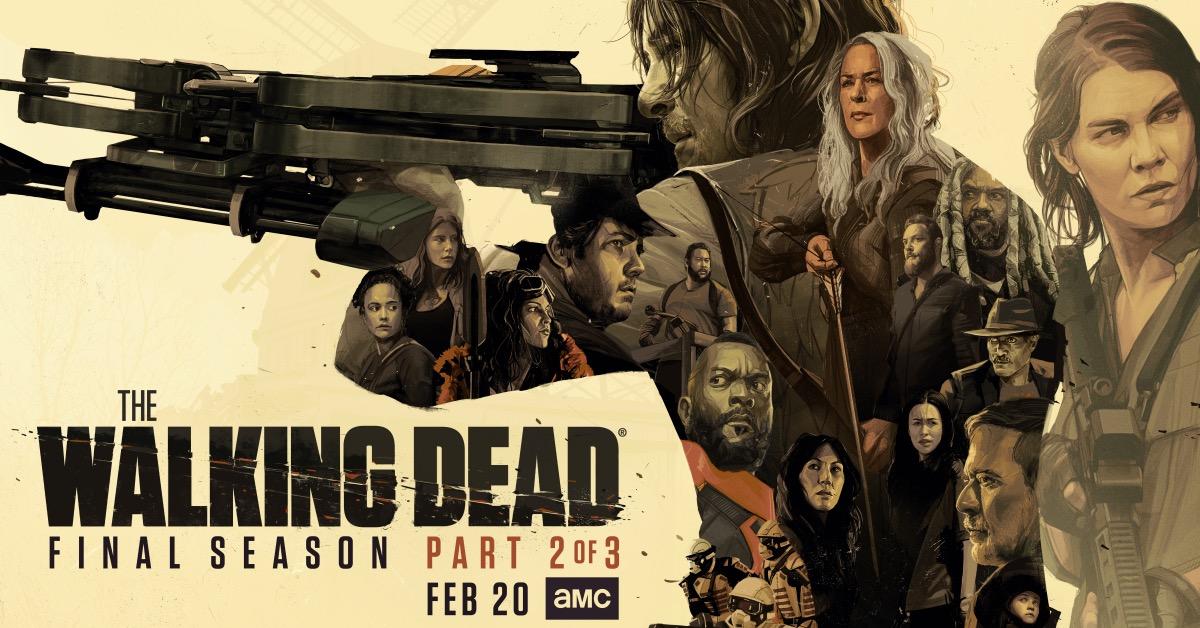 The epic end of The Walking Dead continues in Part 2 of The Final Season, returning February 13 on AMC+ and February 20 on AMC. Below is a spoiler-free review of Season 11B episodes “No Other Way” and “New Haunts” (airing February 27). After eleven years and as many seasons surviving the undead apocalypse, The Walking Dead‘s dictum of “fight the dead, fear the living” is called into question by Daryl (Norman Reedus) in a standoff with another enemy group. “We’re doing this all wrong,” says Daryl in the AMC zombie drama’s February 20 return. “We survived everything for what? Keep fighting and killing each other?”

While still a final third part away from the homestretch (an eight-episode Part 3 airs later in 2022), the endgame of The Walking Dead is not survival, but humanity rebuilding civilization. Enter the Commonwealth.

Picking up where October’s Part 1 finale “For Blood” left off, Part 2 premiere “No Other Way” is less the beginning of Season 11B and more the end of Season 11A. The Walking Dead went on winter hiatus with cliffhangers at Alexandria (weathering a violent storm) and Meridian (the town turned warzone by the Reapers), leaving the resolution for this twisty, action-packed premiere.

It’s not until the final moments of 1109 that The Walking Dead twists into a fresh — and daringly different — direction.

The episode from veteran series writer Corey Reed (“A Certain Doom”) and first-time TWD director Jon Amiel (American Gods, AMC’s Halt and Catch Fire) seldom slows down, alternating between Alexandria’s blood-splattering walker invasion set-piece and Maggie’s (Lauren Cohan) warpath in her turf war with the Reapers. (“They come at night, and by the time you see them, you’re already dead,” Maggie warned of the ultimately underwhelming boogeyman villains.)

After spending a third of these final 24 episodes on the road to Meridian, Season 11A’s main storylines converge when Eugene (Josh McDermitt) returns with a delegation from the Commonwealth. Plot threads at the forefront of 11A — the tense truce between Maggie and Negan (Jeffrey Dean Morgan), the antagonistic relationship of Daryl’s family and Leah’s (Lynn Collins), the mission to take back Meridian from the Reapers and save Alexandria — move to the background as the Commonwealth takes over the “A” story.

It’s a revitalizing and much-needed change of pace (and scenery). When Commonwealth envoy Deputy Governor Lance Hornsby (Josh Hamilton) arrives at Alexandria, it’s to offer the survivors a choice: stay and rebuild or join the 50,000 survivors living in Ohio’s Commonwealth, an advanced community led by Governor Pamela Milton (The Boys and The Blacklist‘s Laila Robins).

The status quo shifts as some Alexandrians assimilate into the Commonwealth, some stay behind, and others end up elsewhere. By the end of “No Other Way,” there’s been a major shakeup, a time skip, and friction between former allies now on opposing sides. Though not as lengthy as the 18-month and six-year time jumps of Season 9, a leap forward does leave burning questions and gaps to be filled in as the season progresses.

The season shifts to a mystery-thriller vibe as the new residents realize the Commonwealth is not as idyllic as it seems. The Walking Dead explores themes of classism, inequality, and systemic oppression through a post-apocalyptic lens as a movement to resist the Commonwealth threatens to upend the New World Order — and Governor Milton’s tightly-controlled system of bringing order to the chaos.

“New Haunts,” also directed by Amiel and penned by newcomer Magali Lozano, is reminiscent of Season 5B, which saw Rick Grimes (Andrew Lincoln) and his group of road-weary survivors struggle to adjust to assimilate into Alexandria. Returning showrunner Angela Kang (Seasons 9 and 10) again refreshes The Walking Dead with settings and situations that feel like they don’t belong on The Walking Dead — like a luxurious Halloween masquerade ball — and it’s the energizing jolt a long-running show needs, even this close to the end. Because we’ve never seen a fully-functioning civilization, it’s an adjustment for the audience as much as it is for our characters.

After an explosive start to the season in “No Other Way,” the move to the Commonwealth in “New Haunts” gives the show a fresh start and a fresher feel. As the Rick-less television series adapts a comic book story that hinged on Rick Grimes, even comic book readers won’t know what to expect from this provoking, and unpredictable, penultimate chapter.

Follow the author @CameronBonomolo on Twitter and @NewsOfTheDead for The Walking Dead Universe coverage all season long.