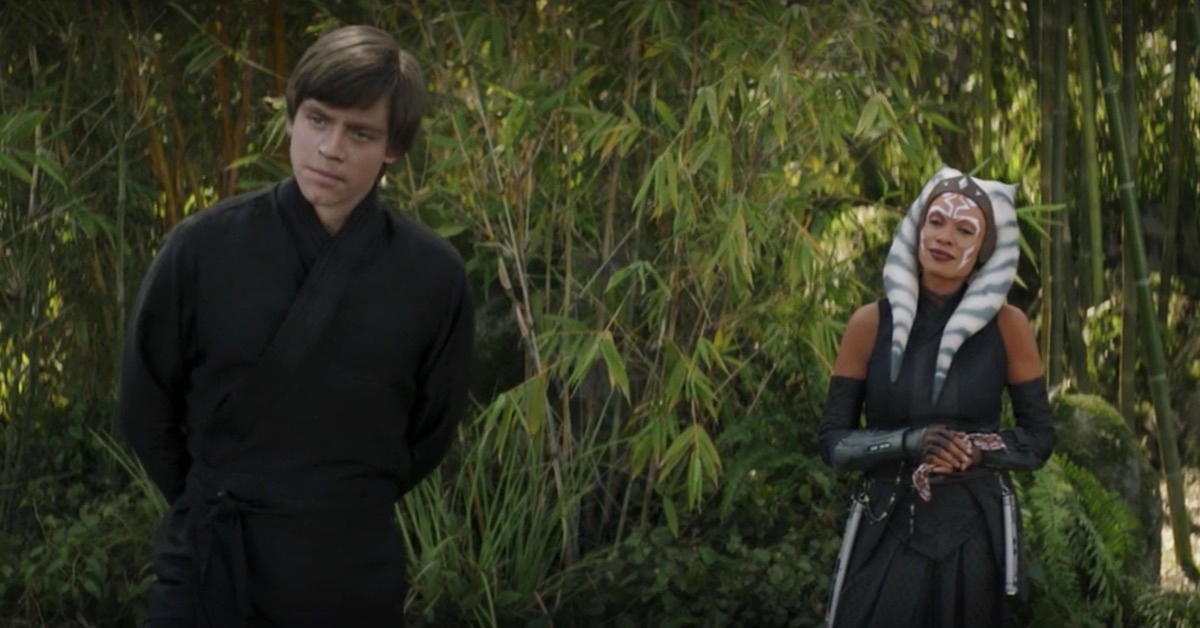 Star Wars: The Book of Boba Fett is set to air its finale episode on Wednesday, bringing one of the most talked-about chapters of Star Wars storytelling to a close. The Disney+ exclusive series has been a cause for debate among many within the Star Wars fandom, both for its unconventional approach to its titular character’s story, and for its various cameos and Easter eggs to the larger franchise. The series’ sixth episode, “From The Desert Comes a Stranger”, proved to bring that latter category in spades, almost entirely detouring away from Boba Fett (Temura Morrison) to weave in the stories of other Star Wars characters. Along the way, fans got to witness an interaction from two characters that they might not have ever expected to see — the scene between Luke Skywalker (Mark Hamill) and Ahsoka Tano (Rosario Dawson).

Part of Episode 6 concerned Din Djarin / The Mandalorian (Pedro Pascal), who needed to deliver something to Grogu before he could help Boba and his crew with the fight on Tatooine. This took Din to the planet where Luke was building his Jedi Academy, with the hopes of making Grogu his first student. Din had a conversation with Ahsoka, who introduced herself as an old friend of Luke’s family, and offered to give the gift to Grogu so as not to interrupt his Jedi training. Later, Ahsoka joined up with Luke to discuss Grogu’s progress and Din’s role in that, and to praise Luke’s work as a Jedi master. When Luke admitted that he was unsure of Grogu’s allegiance to the way of the Jedi, Ahsoka remarked that he was just like his father, and told him to trust his instincts. Ahsoka then left Luke to continue to train Grogu, and teased that he will “perhaps” see her again.

While the scene between Luke and Ahsoka only provides a small (but significant) bit of The Book of Boba Fett‘s plot, it does provide something else — an unprecedented interaction between two of the Star Wars universe’s most beloved Jedi. The current Star Wars canon had previously established that Luke was at least aware of Ahsoka, as (according to the reference book Star Wars: The Secrets of the Jedi), he chronicled her history while on exile in Ahch-To. But the logistics of the franchise’s timeline — and Ahsoka’s story, at least pre-The Mandalorian, being set before the events of the Original Trilogy — made the idea of them canonically crossing paths a bit ambiguous. If anything, it was the kind of interaction that fans might’ve gotten in a tie-in comic or novelization, given the logistics that would’ve had to have gone into seeing a younger Luke onscreen once again.

But, thanks to the Disney+ Star Wars shows opting to selectively feature Hamill as a younger Luke, with the help of a body double, some CGI, and deepfake technology, it became clear that Luke and Ahsoka at least canonically ran in the same circles around the same time. And while there’s no telling if we will get any other sort of live-action interactions between the two, what we did get served as a casual, but profound new chapter of Ahsoka’s onscreen legacy. After years of beloved canon surrounding Ahsoka’s relationship with Anakin Skywalker in The Clone Wars, getting to see her cross paths with his son years later — and witness the best qualities of her mentor be passed on to a new generation, even given the tragic ending that will eventually befall Luke’s Jedi academy — is something incredibly compelling. It also adds a new layer of narrative significance to the plot of the upcoming Ahsoka spinoff show, which is confirmed to include the return of Hayden Christensen as Anakin, and dive further into Ahsoka’s bond with the Skywalker family in some capacity.

The meeting between Ahsoka and Luke is the kind of scene that fans have spent years written fanfiction and made fanart for, but never would’ve imagined they’d see realized in such an epic way. And while “From The Desert Comes a Stranger” was chock-full of moments like that, particularly with the showdown between Cobb Vanth (Timothy Olyphant) and Cad Bane (Corey Burton), Ahsoka and Luke’s interaction provided a specific — and surreal — bit of fan service.

New episodes of The Book of Boba Fett debut Wednesdays exclusively on Disney+.