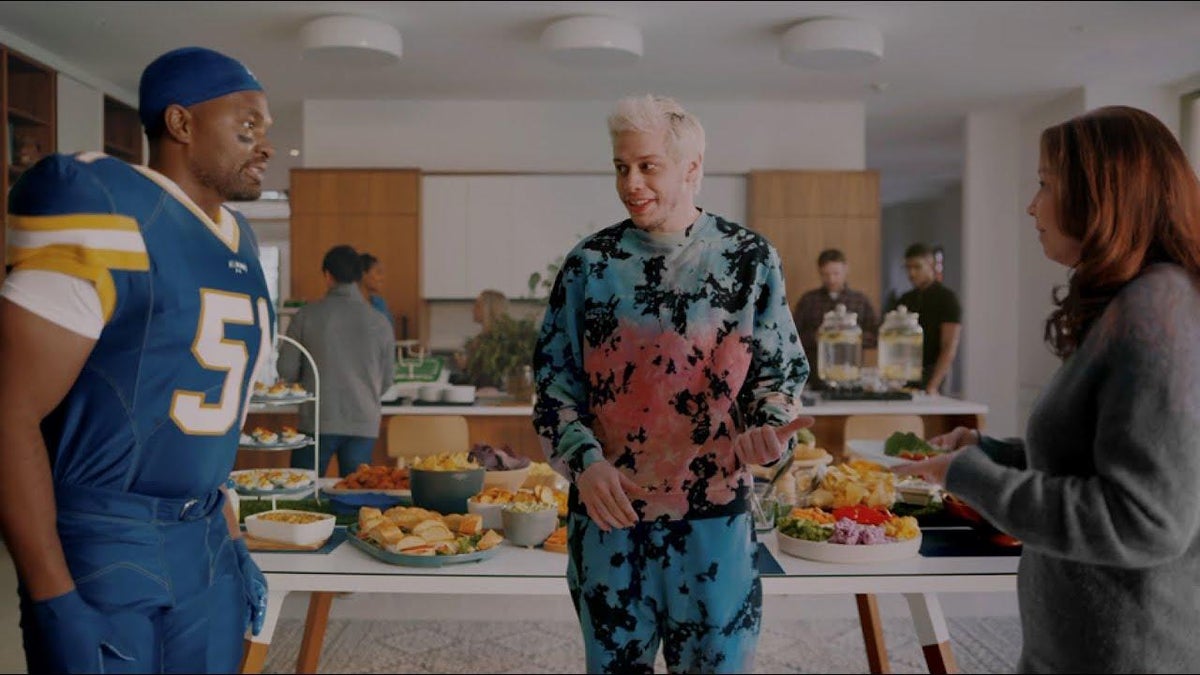 After tackling Saturday Night Live and Judd Apatow movies, it is Pete Davidson‘s turn to get tackled. The popular comedian and actor has partnered with Hellman’s Mayonnaise for a brand new Super Bowl commercial, focusing their efforts on food waste. The new ad, titled Mayo x Mayo, features former NFL linebacker and current New England Patriots linebacker coach Jerod Mayo as he aims to tackle the folks wasting food and give them sustainable alternatives to use their leftovers.

While the ad won’t be airing on TV until the Super Bowl this Sunday, Hellman’s released it online Monday afternoon. Davidson appears in the second half of the commercial with his mother, Amy. Once Mayo tackles several food-wasters, he comes for Davidson, only to be told the comedian and his mom have already come up with a waste solution. The tackle takes place anyway. You can watch the full ad below.

Mayo x Mayo will air during the fourth quarter of Sunday’s NFL Super Bowl. The clash between the Los Angeles Rams and unlikely postseason underdogs the Cincinnati Bengals will take place on Sunday, February 13th. The game will be broadcast on NBC in addition to streaming live on NBCUniversal’s Peacock service.

“It’s not every day I get tackled by a football pro like Jerod Mayo,” Davidson said in a statement. “I love that Hellmann’s has made it their mission to reduce unnecessary food waste at home, which is cool because we can all get involved. Ma and I have learned a lot and have had fun figuring out ways we can waste less ourselves. All food has potential, so let’s keep it out of the garbage.”

“Food waste in the U.S. is something we must tackle together,” said Mayo. “At home, my wife Chantel and I always try to use leftover ingredients in our pantry or fridge to reduce food waste and we hope this spot encourages people to do the same.”

What do you think of the new Hellman’s Mayonnaise ad? Where does it rank amongst the Super Bowl ads that have been released so far this year? Let us know in the comments!