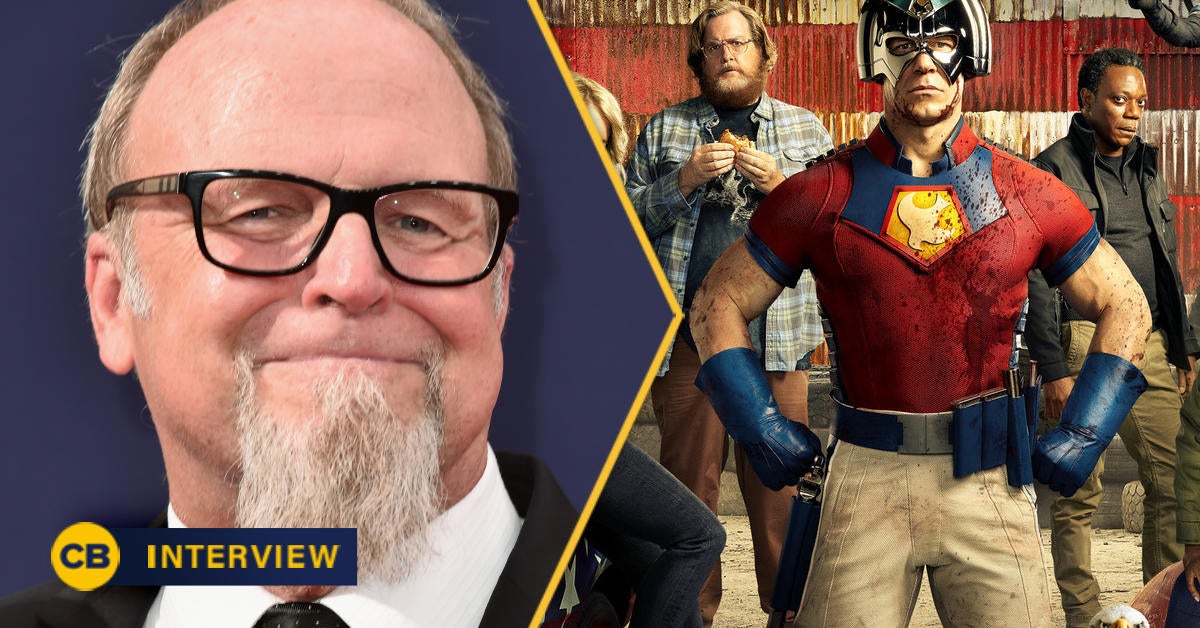 Over the past few weeks, audiences have been treated to DC’s Peacemaker, the first live-action television series to be tied to the DC Films universe. The series, which spins out of the events of The Suicide Squad, follows the ongoing adventures of Christopher Smith / Peacemaker (John Cena), as he and a ragtag team of characters uncover a new conspiracy. There are so many elements of the HBO Max series that have been praised by fans, including its approach to music. In addition to a soundtrack jam-packed with hair metal tunes, the auditory experience of the series is also influenced by its score, which is composed by Clint Mansell and Kevin Kiner.

Kiner is no stranger to composing for beloved franchises, as he might be best known for his musical contributions to Star Wars: The Clone Wars, Star Wars Rebels, and Star Wars: The Bad Batch. He and Mansell have also collaborated on two DC series that now reside on HBO Max — Titans and Doom Patrol. With Peacemaker, Kiner and Mansell’s work is take into a decidedly unique, but emotionally impactful, new territory. In celebration of Peacemaker’s debut, ComicBook.com chatted with Kiner about his and Mansell’s work on the series, how it differs from his other experience in the DC universe, and so much more.

You’ve worked in the DC space on so many of these different characters. Are there any other characters in the DC Universe who you would still love to compose for?

When I was a kid, I literally climbed the walls — we had a small hallway and I could, like mountain climbers, press against each side — and I climbed the walls in our house. I would hang up there in the ceiling until my mom came by and yelled at me. I was really into being Spider-Man. And then, my hobby is the ocean. I sail and I surf and I’m always in the water. I just got out of the water a few hours ago. So Aquaman would be pretty cool too.

What has it been like working on the series during the COVID-19 pandemic?

It’s totally in the normal context. I mean, we film and television composers are hermits. We sit alone in our room, with the picture that we’re tasked with scoring, and rewind it 3000 times, and play a French horn part, and then write it down however you do it. I used to write it on pencil, with pencil and paper, but it’s much faster now using the computer and a keyboard. So it really, COVID hasn’t changed anything for us.

How do you feel that your collaborative relationship with Clint has evolved, over all of these projects that you’ve done together?

We worked on a couple of films together, even before Titans, so it’s been a while that we’ve been working together. I really like Clint as a person, and I like him creatively. I like his personality and that he’s so out of the box and he’s just so unusual. I’m really attracted to that. That’s what I want to do. I want to do things that haven’t been rehashed over and over, and he has very interesting ideas.

Early on with Peacemaker, we we’re trying to figure out what his theme was going to be and stuff. And I came upon this chord progression in the playlist that James had sent us and I’m like, “Wow, these hair metal bands, they always do this one chord progression. It really has that sound to it. I wonder if we could…” And then I get an email —I forget if it was email, or Clint called me, or I called him — but he says, “Hey, there’s this chord progression I’ve just been thinking about,” and it was the exact same one. He was listening to a different tune in a different key, but it was the exact same thing. The same day, the same idea. It was really spooky.

The projects that you and Clint have done in the DC universe have covered some lesser-known aspects of DC lore. I would argue that even the Teen Titans aren’t necessarily household names to some people. Do you find that there’s more creative freedom within that?

Yeah, absolutely. When we started Titans, Clint and I had a lot of back and forth, whether that be trading sounds or licks or whatever, with really old vintage ’80s and even ’70s synthesizers. We didn’t want it to be what everybody is doing with superhero films. Alan Silvestri did a fantastic job with Iron Man and Avengers and all of that, but that’s been done now and we wanted to go somewhere else with it. We still have the orchestra, there’s still the moments — whether that be Nightwing or Robin or Batman or Superboy — in Titans, where they are superheroes and we do play that. But there’s a lot more going on.

Doom Patrol takes that even a step further. There’s really no orchestra at all in Doom Patrol. So to your question of if it gave us more freedom — that’s reflected in our music, because it’s not what you usually hear in a superhero [adaptation.

The series balances the extremes of masculine hair metal and also very vulnerable, emotional moments at the same time, and it feels like the music really lets that shine. How did that influence you guys’ work?

That was something that we were very keen on from the beginning — and James is big on it too — is that the show might be hilariously funny, it might be action packed, it might be quirky and bizarre and all of those things. But at the end of the day, it’s Chris Smith’s emotional journey that he takes — who he is as a person, his conflicts of how he’s been raised, his problems with his father, his problems relating to women, and just relating to people instead of alienating them. I think, for James, that’s what the show is about it. All the other stuff is just makes it fun, but it’s really about the heart and soul of this guy and also other characters, like Adebayo and Harcourt and Economos. They are really fleshed out.

I always say that the music is a reflection. If I do good music, it’s a reflection of what I’m working on. Ninety percent of the time, if you give me a good drama and a good emotional journey, I’m going to feel that. I mean, I hear music when I watch pictures. When a story is told to me, that’s when I hear tunes. So, it’s just a reflection of what a fantastic job James did.

ComicBook.com: What led to both you and Clint working on Peacemaker?

Kevin Kiner: I’m not actually positive, but I believe that James knew about our work. Also, I know that Peter Safran, who is the executive producer, has worked with Clint before. I don’t know what the project was. I should find that out, because people are asking me all the time. But yeah, that’s what put us on their radar. And I assume, also, our work on Doom Patrol and Titans.

Once you got an idea of what the story was, and how it fit into The Suicide Squad, what drew you to the idea of working on the show and telling that story?

Well, as you know, James Gunn is extremely encyclopedic in his knowledge of music — and especially source tunes and stuff. He really pays a lot of attention to music. So right off the bat, we had a lot of discussions with him. He’s a fantastic director, as everyone knows, and that translates also into the music department, and the way he handles us and the way he handles music, and describes how the music should sound and what he’s thinking. A lot of the conversation initially evolved around that the type of source cues were going to be late ’80s and early ’90s hair metal. It was going to be bands like Hanoi Rocks and Cinderella and Wig Wam — which actually is not a late ’80s, early ’90s group. They used that song in the main title, which is one of, maybe, the greatest main titles ever in the history of show business. We talked about that a lot. Clint did something similar in The Wrestler, when there was a source element and he incorporated a bit of that sound in his score. So there was a lot of real philosophical talking and a lot of giant Spotify playlists that James sent us.