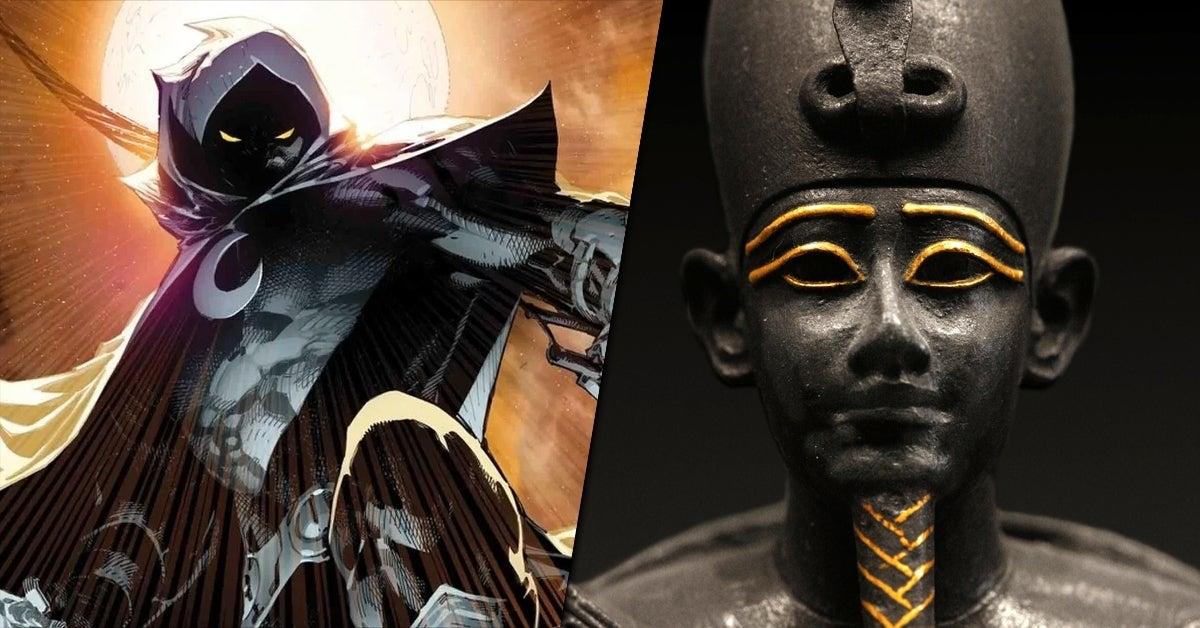 Much like Black Panther and Shang-Chi before it, Moon Knight is set to introduce fans of the Marvel Cinematic Universe to an entirely new corner of the franchise. While the films mentioned dabble in fictional world-building, Moon Knight will draw from centuries-old Egyptian mythology and feature gods and deities that have been in all kinds of mediums throughout the years.

The latest synopsis for the series even teases a “war between gods,” so we gathered a handful of the potential deities that could end up appearing in live-action for the upcoming Disney+ series. Keep scrolling to see who we think could appear.

The most obvious choice for inclusion in Moon Knight—in fact, most would consider it a guarantee—is Khonshu, the Egyptian god of the moon. The show’s eponymous character is oftentimes referred to as the Fist of Khonshu, and the history of the character is deeply embedded within the god and his mythos. While Khonshu is a smaller god amongst the Egyptian pantheon, he’s a near-lock to appear at some point within the series. In fact, he’s so prominent in the Marvel source material, he could even appear in the show’s trailer due out Monday.

Another favorite amongst fans is Anubis. The Egyptian god of the dead appeared opposite Marc Spector in the Moon Knight series from Jeff Lemire and Greg Smallwood, and some fans have already noticed a jackal-like being appearing in the short teaser released by Marvel Studios on Saturday. According to Egyptian mythology, Anubis is the god that greets recently deceased immediately after death to assess their worthiness, making the decision as to whether or not they may enter the underworld. In the Moon Knight comics, Spector is mortally wounded during his time as a mercenary and eventually dies at the feet of a Khonshu statue, a perfect scenario in which Anubis can be introduced.

Osiris first god on this list to not have a direct connection to Moon Knight or Marc Spector. In mythology, Osiris is murdered by his brother Set and chopped into 14 different pieces. His wife Isis eventually manages to piece him (almost entirely) back together and resurrect him. Upon his resurrection, Osiris took over Anubis’ role as god of the dead, which was just one of his roles. He was also god of the underworld, with some comparing him as the Egyptian version of Hades from the Greek pantheon.

Ra is the god of gods, and long-thought to be the king of all Egyptian gods comparable to Zeus. He’s also found himself directly opposite Marc Spector in the Moon Knight series from Max Bemis and Jacen Burrows. In that run, the Sun King says he pulls his power right from Ra, who also happens to be the god of the Sun. Some suggest the Sun King is who Ethan Hawkeye will ultimately play.

Moon Knight has yet to set a release date. If you haven’t signed up for Disney+ yet, you can try it out here.

Which characters would you like to see pop up in Moon Knight? Let us know your thoughts either in the comments section or by hitting our writer @AdamBarnhardt up on Twitter to chat all things MCU!