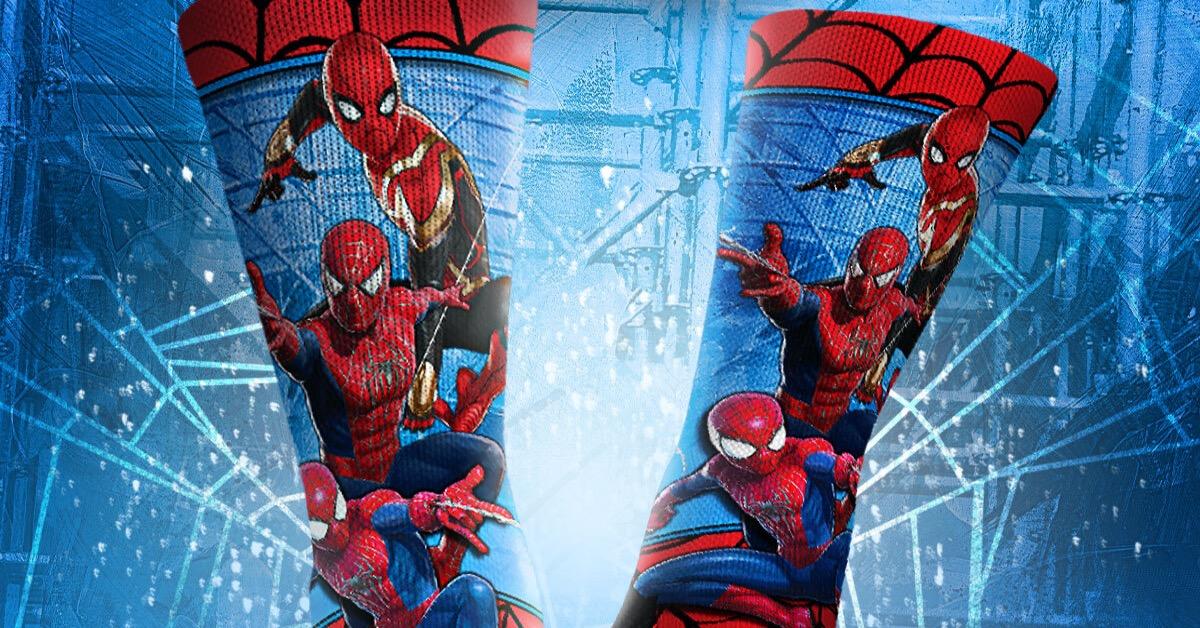 Step foot into the Multiverse with more Marvel merchandise bringing together three generations of Spider-Men. For the first time, the Spider-Man (Tom Holland) of the Marvel Cinematic Universe unites with the Friendly Neighborhood Spider-Man (Tobey Maguire) and the Amazing Spider-Man (Andrew Garfield) to knock your socks off in Spider-Man: No Way Home. After revealing the official designations for these multiversal Variants, Marvel is taking another swing at the live-action Spider-Verse with the second wave of merchandise featuring the cameo of really good lawyer Matt Murdock (Charlie Cox) and the web-slinging trio of Peter #1 (Holland), Peter #2 (Maguire), and Peter #3 (Garfield).

This newest look at the trio of Spider-Men comes from Rock Em Socks’ Spider-Man: No Way Home collection. The online socks store is selling multiple styles inspired by the new movie, including the Spider-Men pair and Peters All-Over.

At one point in No Way Home, Peter #3 hugs his “brothers” from another mother (and multiverse). The heartwarming exchange can warm your feet with the “I Love You Guys” socks featuring the three Spideys in their iconic suits. Also available is the “Power & Responsibility” pair, named after the iconic phrase inspired by the Peters’ respective Uncle Bens and Aunt May (Marisa Tomei), as well as a five-pack highlighting Peter #1’s magical misadventure with Doctor Strange (Benedict Cumberbatch).

Along with a Peter Parkers 3-Pack of three different designs, each featuring the trio of Spider-Men, fans can purchase a Villains 3-Pack if they get a kick out of multiversal villains Green Goblin (Willem Dafoe), Doctor Octopus (Alfred Molina), and Electro (Jamie Foxx).

See the designs below.

I Love You Guys