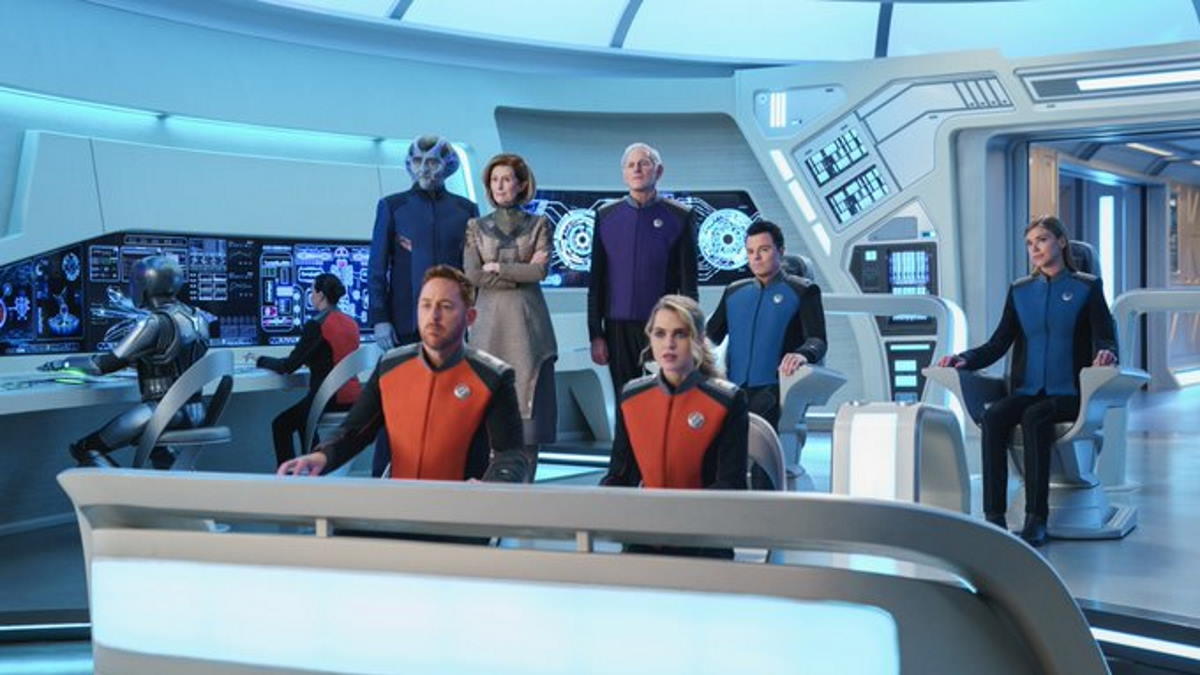 Hulu has provided The Orville fans with the first look at the show’s return as The Orville: New Dawn. That new subtitle comes as The Orville becomes a streaming original on Hulu, leaving its broadcast home, FOX, behind. It’s been a long wait, but The Orville fans can finally start counting down the weeks. The new image shows several returning characters: Capt. Ed Mercer (Seth MacFarlane, series creator), Cmdr. Kelly Grayson (Adrianne Palicki), and Lt. Gordon Malloy (Scott Grimes), and Isaac (Marc Jackson) at their posts on the ship’s bridge. Recurring guest star Admiral Halsey (Victor Garber) is also present.

The photo also offers the first look at The Orville‘s newest cast member, Anne Winters (13 Reasons Why, Tyrant), as Ensign Charly Burke. The remaining two figures on the bridge are guest stars Bruce Boxleitner (Babylon 5) and Lisa Banes (Royal Pains, Nashville) as President Alcuzan and Senator Balask. You can see the photo below.

Based on a statement from McFarlane when announcing the series’ move to Hulu, the choice came down to the resources needed to support the show’s production costs. “The Orville has been a labor of love for me, and there are two companies which have supported that vision in a big way: 20th Century Fox Television, where I’ve had a deal since the start of my career, and FOX Broadcasting Company, now FOX Entertainment, which has been my broadcast home for over 20 years. My friends at the network understood what I was trying to do with this series, and they’ve done a spectacular job of marketing, launching and programming it for these past two seasons. But as the show has evolved and become more ambitious production-wise, I determined that I would not be able to deliver episodes until 2020, which would be challenging for the network.”

Unfortunately, the COVID-19 pandemic meant that 2020 and 2021 were too soon for new episodes of The Orville to air. In September 2020, McFarlane offered an update on the show’s status.

“All I can say is we’re working on it,” MacFarlane said. “We’re working very hard. We got hit by this just like everyone else, but we are working on it. We will be back soon, folks. There has been a lot of speculation online: Will the show come back? The show is still a huge priority for me and for the cast and everyone else. We do have a season to finish, and we are going to finish it. For a show with a lot of prosthetic makeup that requires close contact, a lot of background artists, it’s a big job, and you want to make sure you do it in a way that keeps everyone safe and secure. Once we have those protocols figured out, we will start up again and you will get more Orville.”

What do you think? Let us know in the comments section. The Orville: New Horizons premieres on Hulu on March